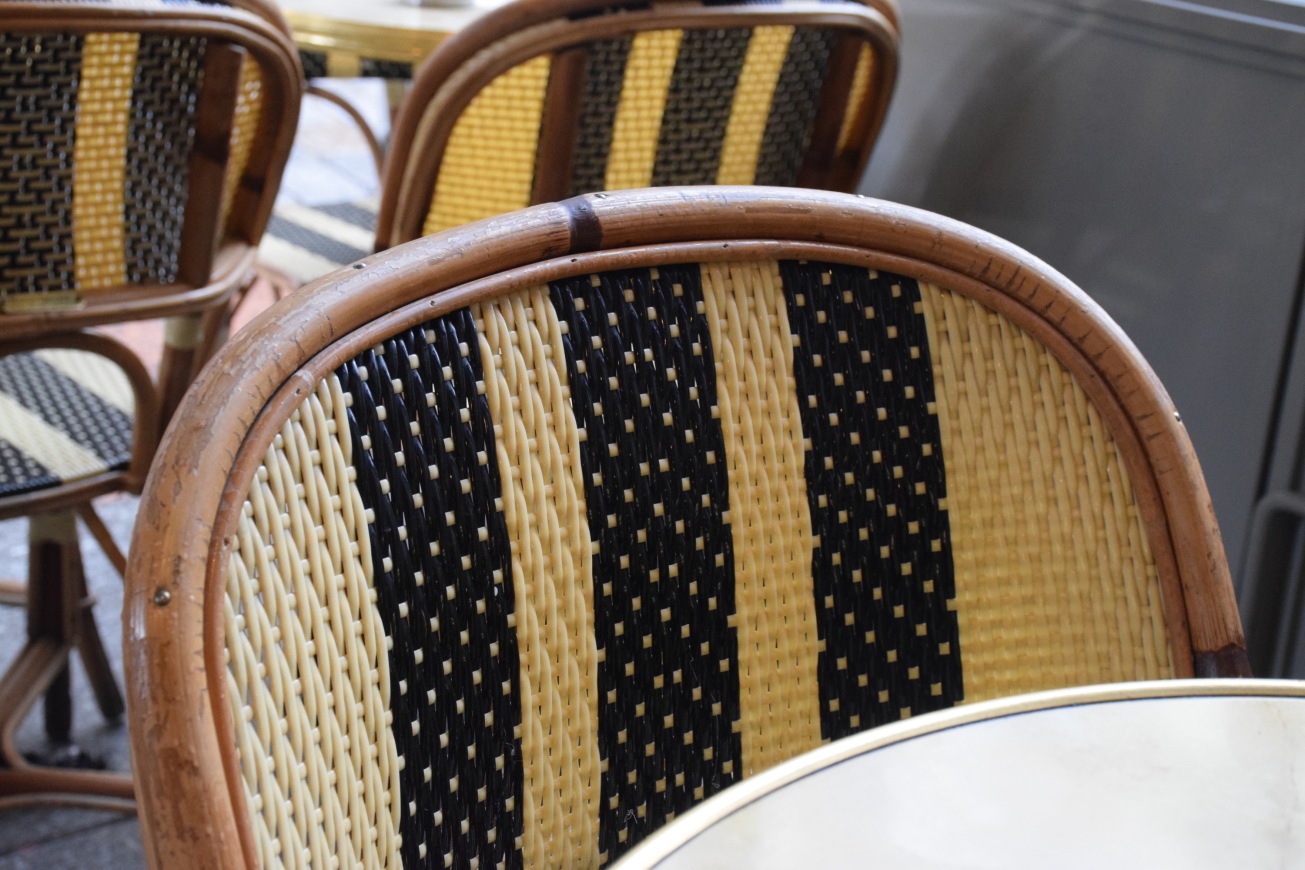 Moments. They are often fleeting, a brief glimpse of something unusual or ordinary that can bring a new perspective. It can be something as simple as the chimney sweep, looking like he could have stepped out of Mary Poppins with his grey clothes and chimney brushes, standing next to you on the Metro. Or it can be more speculative, a puzzle to be teased out. It’s moments that give you a glimpse of the real character of a place and make your trip memorable.

Coming across special moments is part luck and part paying attention. I’m pretty good at observing – I’m quiet and tend to hang back and I watch with a photographers eye, concentrating on details, looking for new angles. Sometimes the best things happen when you just stand still. Here are few of the moments I experienced on this trip to Paris (to go along with the chimney sweep sighting mentioned above)

Before going into the Cluny to visit the medieval art, Michelle and I stopped in at a coffee shop right across from the museum. I love this tiny half-block section of Paris – clustered around a small green is the Sorbonne, founded in 1257, the Cluny, built in the 15th century on top of ancient Roman baths and now this sleek and modern coffee shop. Despite the clean, austere interior, the cafe was inviting and calm with a friendly staff and excellent coffee and pastries. Several people, many undoubtedly students or faculty from the Sorbonne (or so I like to imagine!) were in the cafe, studying and using laptops. To one side a young woman, dressed in a traditional blue and white striped shirt, sat with a friend. After a couple of minutes I realized she was knitting woolen mitts in thick grey yarn (knitting is very popular in France but I have read that French knitters don’t often knit in public). I was further pleased to see that she was knitting Continental style (meaning she held her yarn in her left had; in knitter-speak she’s a “picker”). This is a fairly common style of knitting in Europe and, for some unknown reason, this is the way I knit. Most Americans and British knit English style (holding your yarn in your right hand, known among knitters as a “thrower”) so it’s a bit unusual that I knit Continental. I loved seeing a French person knitting, especially in the same style as I knit and I love that I saw her knitting in this spot in Paris, this crazy combination of old and new, of modern technology and ancient craft, surrounded by the past and the future, something that Paris seems to pull off effortlessly.

[Note: I have no statistics to back up my assertion about the most commonly used styles of knitting, simply anecdotal evidence from years of reading about knitting.]

On our last full day in Paris, I spent a few hours walking around the neighborhood near our hotel taking lots of pictures and soaking up the views (which I wrote about previously). Parts of this neighborhood are quiet and tranquil, but others parts are bustling. At one point, as I approached an intersection I saw a young woman hurrying thru the crosswalk ahead of me. What brought her particularly to my attention was the fact that she was wearing a gorgeous white wedding dress with a full tulle skirt that she held up off the street.  A man walked with her, carrying a large tripod on one shoulder and a full camera bag over the other. Obviously they were on their way to a photo shoot, probably to someplace with a scenic backdrop, or maybe just finished since the Eiffel Tower was just a couple of blocks behind them (it was a Monday morning so it seems unlikely they were simply late to the wedding) Was she a bride wanting the perfect wedding portrait? Or was she a model, working on what will become part of a magazine spread? (I follow several photographers based in Paris on Instagram and it’s pretty common for them to have a photo session with a model at a scenic location). In my imagination, I’ve decided it’s the latter, a model and photographer hard at work in the fashion capital of the world.

My favorite moment though happened in the Marais. It was raining lightly and I had stepped aside in a church vestibule to get my bearings. Trying to compare my map to the streets in front of me, I watched the traffic, mostly pedestrian, going past when a man on a bicycle rode past. Now, that’s not so unusual – bicycles are very popular in Paris. This gentleman was dressed in nice slacks and a sport coat (also not unusual; Parisians dress more formally than Americans by far). What caught my attention (and delight!) was that he was serenely pedaling along while holding an umbrella over his head. It was both quite comical and very dignified. I wish I had been quick enough to to snap a photo, but the memory lives on and makes me chuckle every time.

This finishes my stories about this trip to Paris. I fully intend to visit Paris again and probably on a regular basis, but there are some other places I’d like to visit too. In fact, I have a trip coming up next month and I’ve started thinking about travel plans for next year too (nothing definite yet). In the meantime, there will be some travel-related posts coming up, as well as more on the garden, crafty stuff and memory keeping. Stay tuned!