Its been awhile, hasn’t it? I’m going to give this blogging thing another try, but no promises. Also, if you’re here for travel stories and photos, I’m afraid you’ll be disappointed. Except for the occasional day or overnight trip (you’ve been warned Carol!), I won’t be doing any traveling this year. Instead I’ll be having major knee surgery (I’m hoping to hold off until this summer) and so my time and energy will be taken up with recovery and rehab. However, in 2018 – well, I’ve already got some ideas!

In the meantime, the blog will mostly be about gardening and crafting, with a bit of travel discussion. I hope to post about once a week or so (again no promises!) with a break of several weeks when I have surgery. Not terribly exciting I know, but needs must.

I’m going to start off my return to blogging with a bang though – a behind the scenes look at the gorgeous atrium at the John Deere World Headquarters in Moline. My friend Paula has worked at the atrium for five years and she was happy to show me around – and for good reason. It’s spectacular. 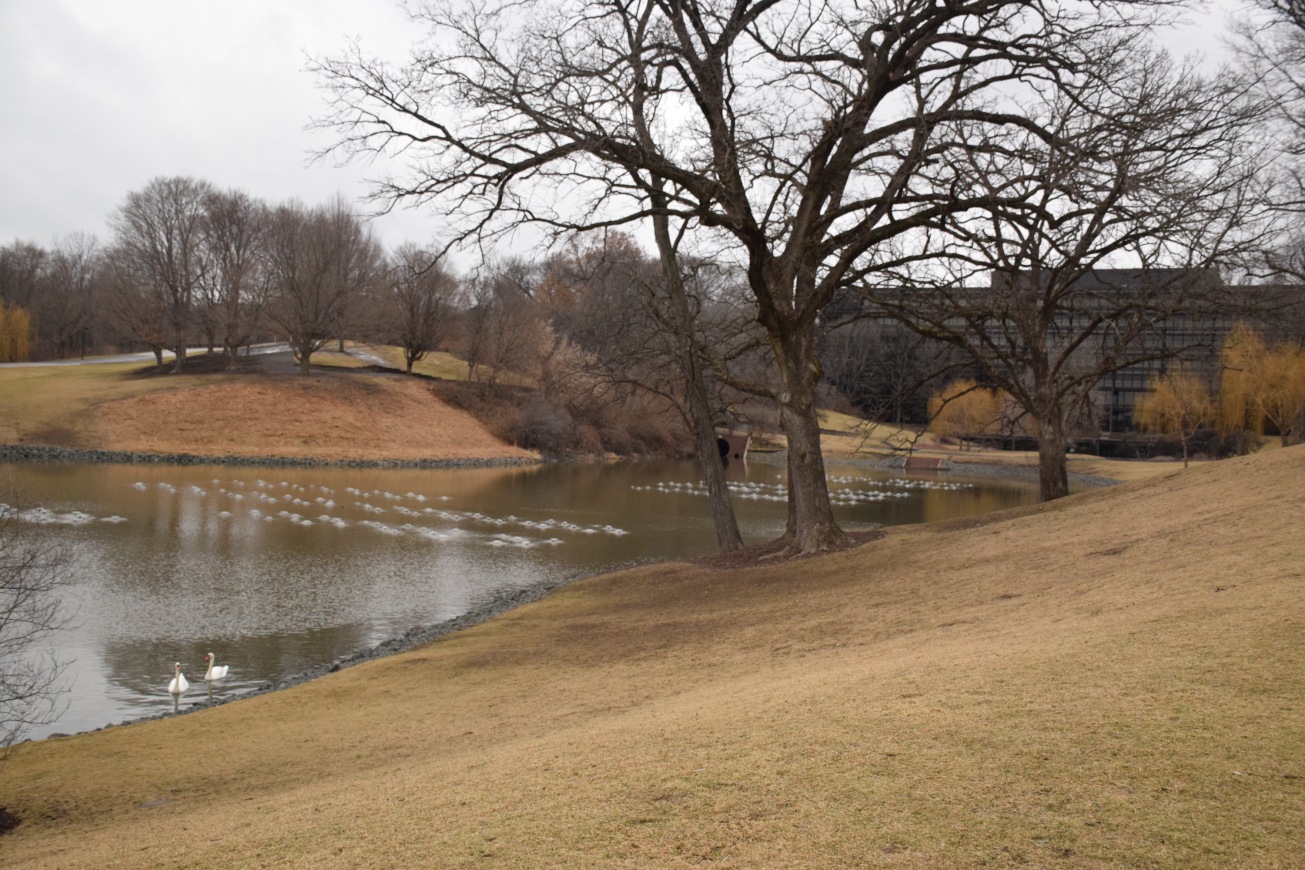 The John Deere Headquarters is set on one of the most beautiful corporate headquarter campus’ in the US and has won multiple awards. Even on this grey January day, the approach to the main building is stunning (and yes, those are swans. There are several in residence here.)

The main building opened in April 1964, and was designed by Eero Saarinen (who also designed the St Louis Arch among many other buildings). He died before the second building (which links seamlessly with the first building) was built, but the atrium, which is in the connection between the buildings, has been part of the design from the beginning.

The buildings use COR-TEN weathering steel which oxidizes to an earthy, copper brown and are used as a visible part of the design, both inside and on the outside of the building. William Hewitt, who was the John Deere President at the time the design was commissioned, wanted a modern building but not a “shiny” one. Instead he requested a building that reflected its agricultural purpose, something “down-to-earth” and “rugged”.  The result is a building that feels fresh and modern even 50 years later and yet also seems timeless. 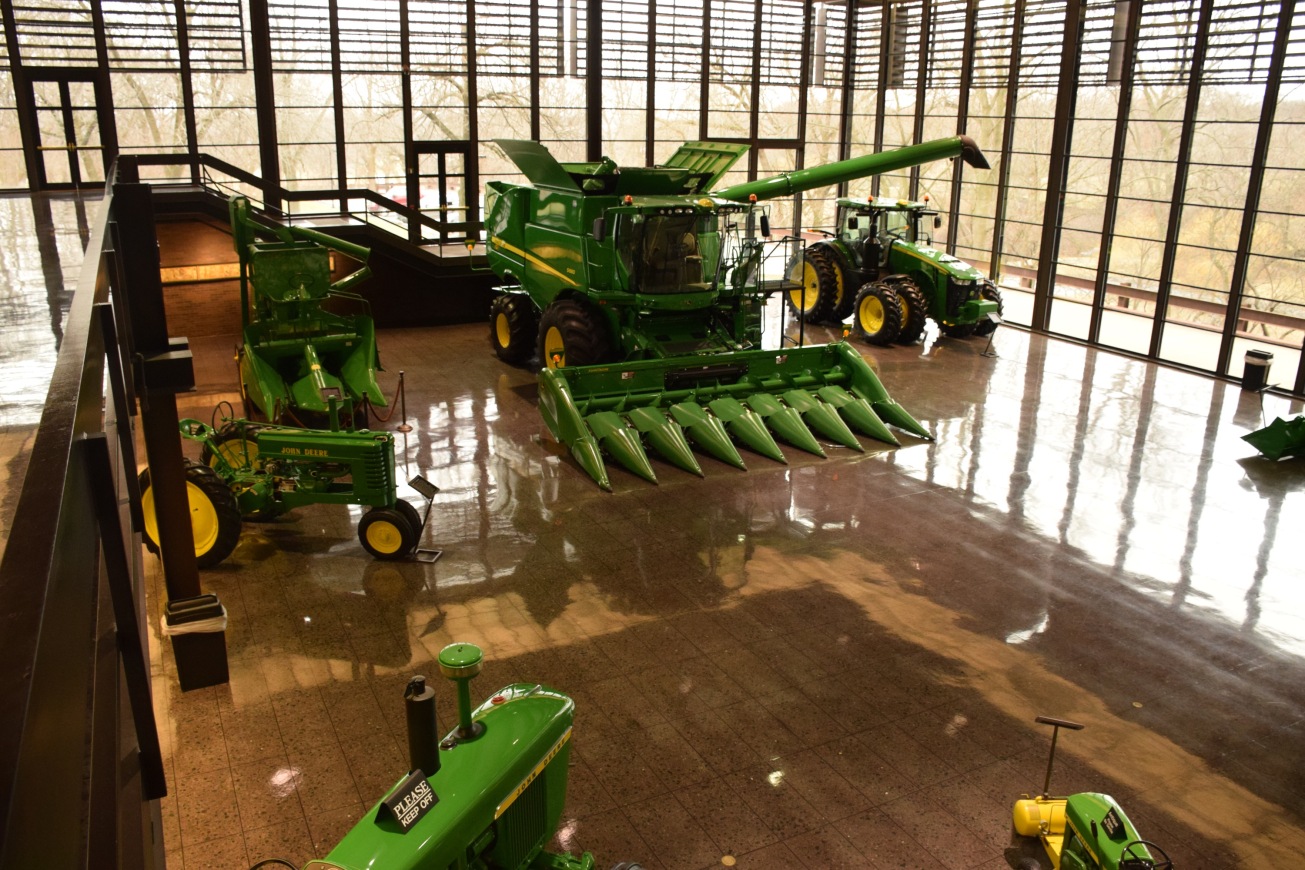 The visitors entrance opens to an impressive display of the tractors and machinery that John Deere is famous for, including some plows, all laid out below you. Anyone is welcome to come here, crawl over the tractors and read the long wall of history (there’s no admission charge). Deere has opened a much larger, more elaborate museum in downtown Moline, but this one is still open as well. I didn’t spend much time here because, after all, I was here for the plants!

I met up with Paula here. She took me over the bridge that spans the tractors and to security. This is when who you know is better than what you know since she could get me in with a visitors pass. 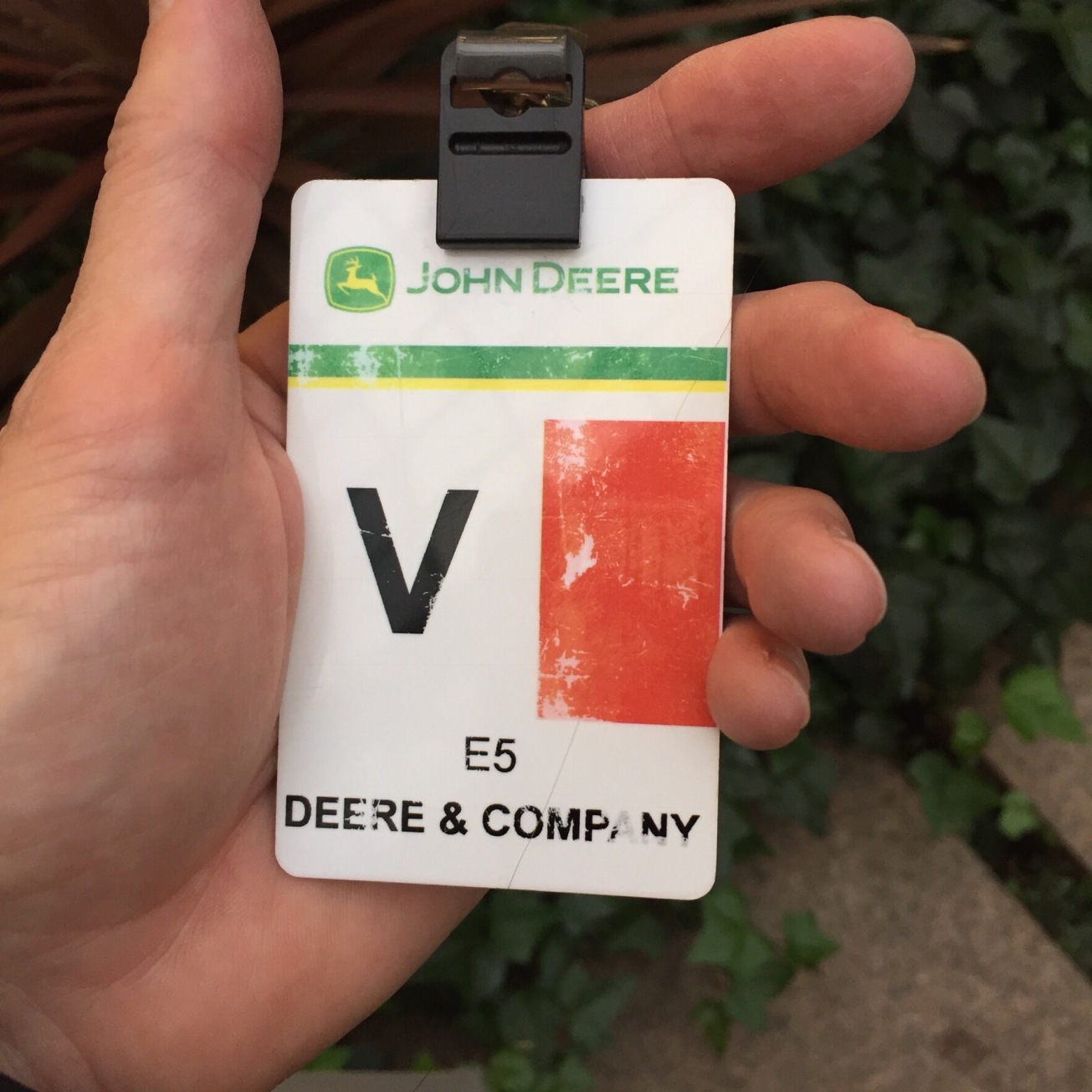 The atrium, to put it mildly, is amazing.

Entering from the main entrance brings you to a bridge that crosses over the atrium and leads to the second building. This means you are in the second level of the building with one above and one below. The atrium winds from this level down to the next with a series of wide granite steps. Paula told me that people often complain that the steps are too wide and the risers are too low to allow for comfortably walking quickly (they are also rather steep in a couple of places). The paths were designed this way on purpose, to force busy people to slow down and take a couple moments to relax and de-stress.

The large plants on the left toward the back with large leaves are white bird-of-paradise; they’re planted in the ground which has allowed to get so tall. They make a very impressive and dramatic statement as you enter. The large rocks throughout were excavated and put in place and the building built around them. 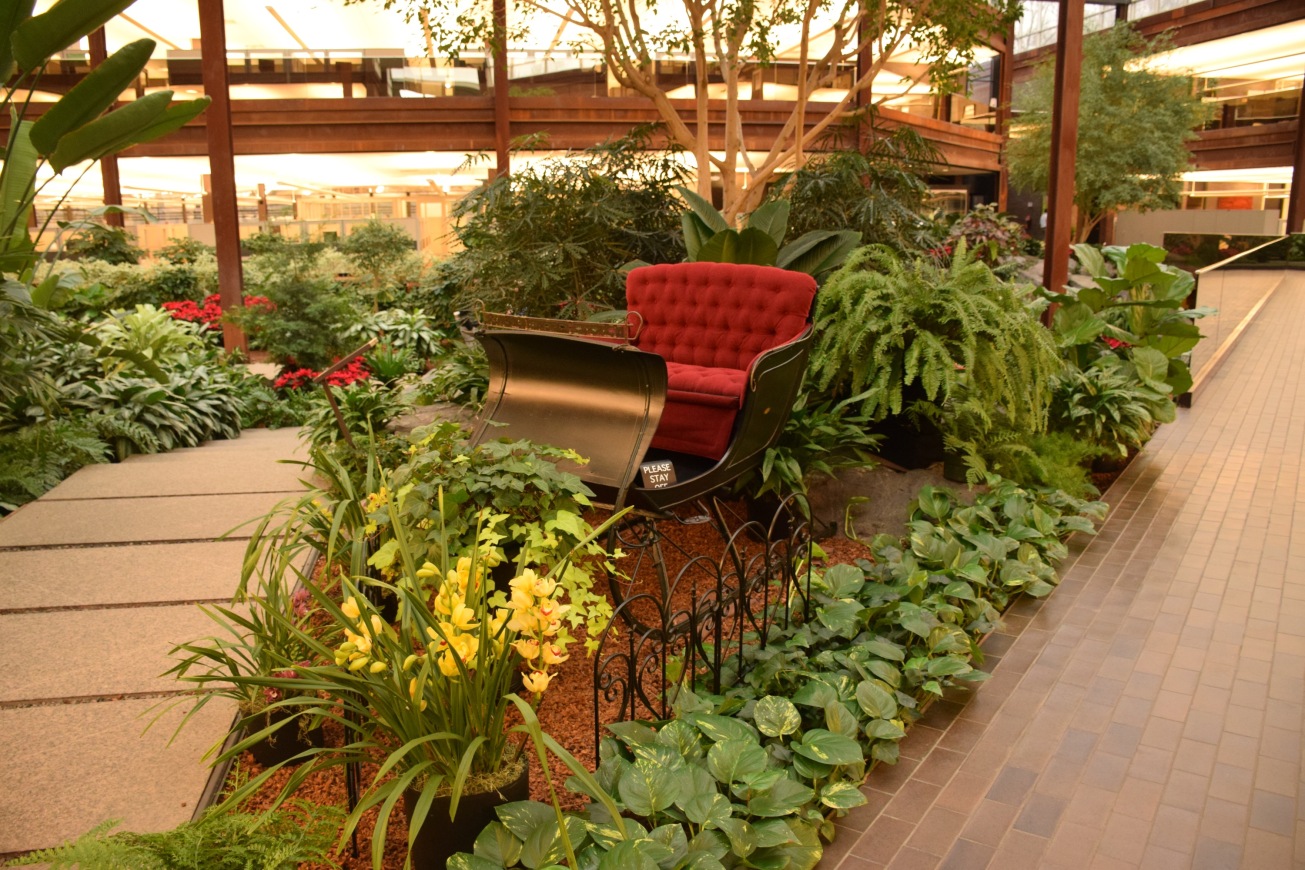 The sleigh is from the John Deere archives, one from when they built carriages and sleighs. Paula uses something different here every season. They still had a lot of poinsettias in place, but they weren’t the bedraggled, sad post-Christmas plants you often see in January, but were lush and beautiful. 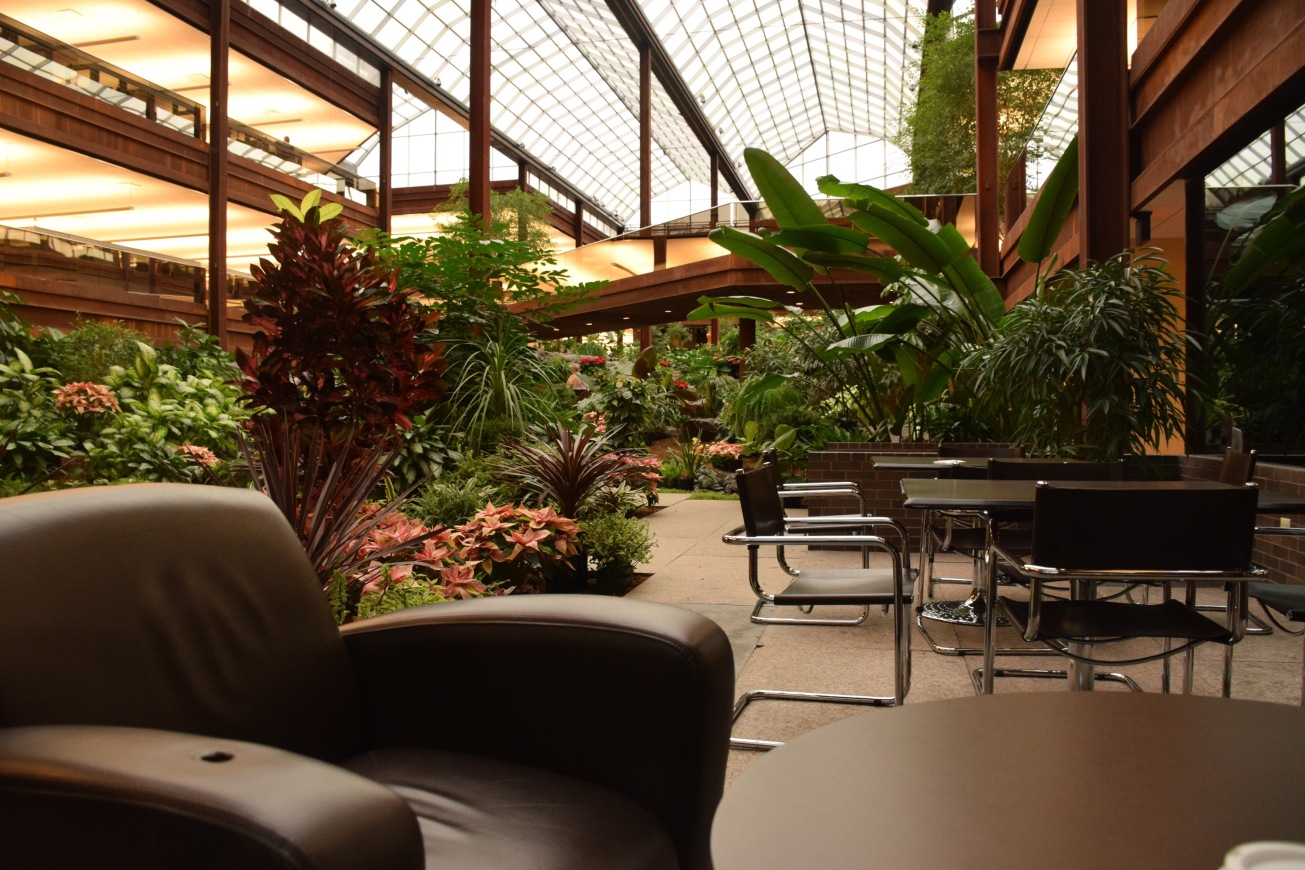 Here’s a view of the lower level, looking back toward the front entrance. Here you can see the bridge that connects the two buildings as well as the great diversity of plants. There are some tables and comfortable seating here, making it popular with staff for lunch and breaks. You can also get a good view of the CON-TEC steel girders which blend in beautifully and organically with the atrium plantings.

Also, note the roof lines of the glass roof. Do they remind you of anything? Yes, they look like the a barn! (And, yes, that was done on purpose!) 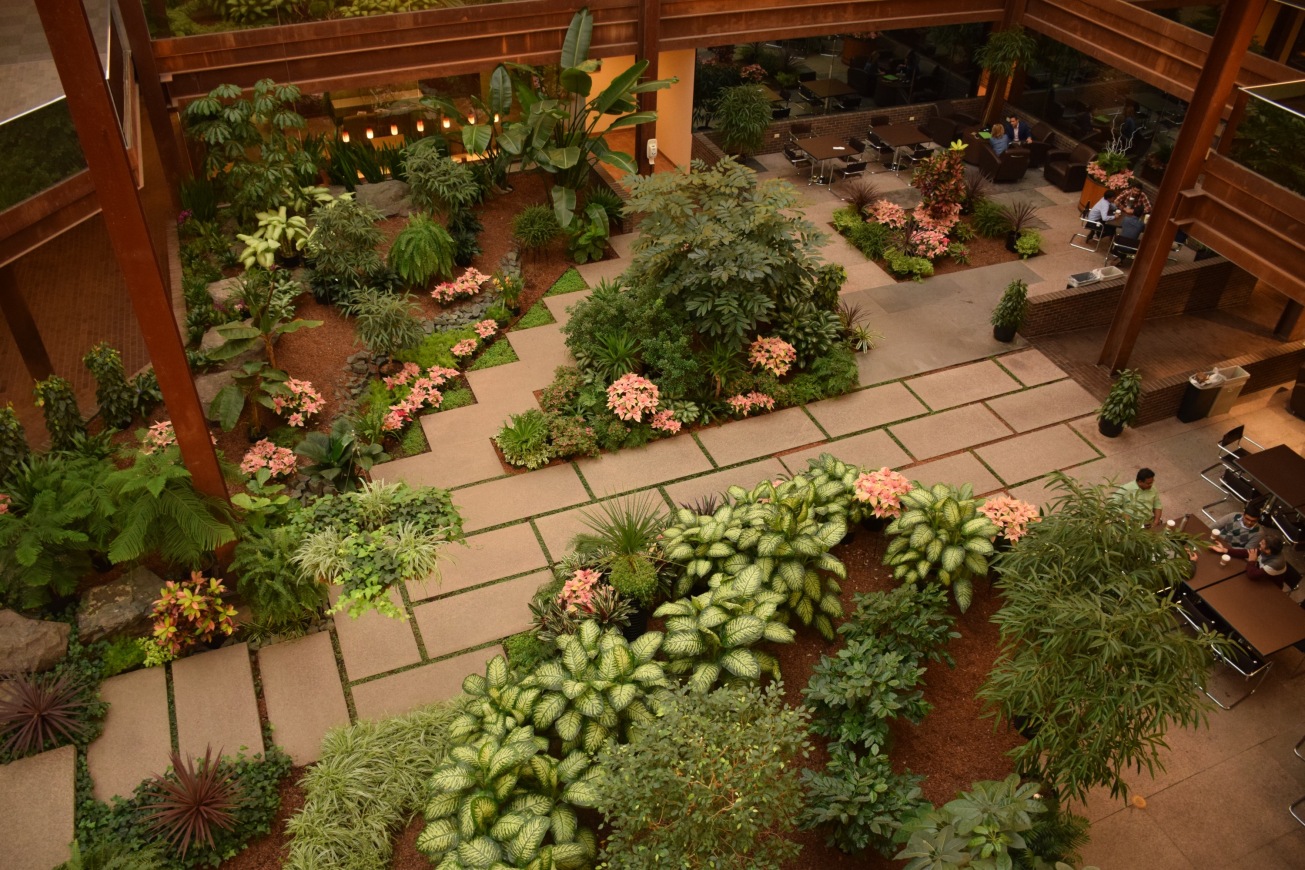 Looking down from the third level gives you a new appreciation for the care and attention Paula has put into the planting design, combining textures, heights, color and variety to create interest and depth. Many but not all of the plants are planted directly in the soil; these plants do much better, growing tall and lush but it is a slow arduous process to transition more to in-ground planting – the original soil is very poor quality clay. It has to be dig out by hand and replaced a section at a time. Budget cuts and staff shortages mean this is a project that happens slowly at best. 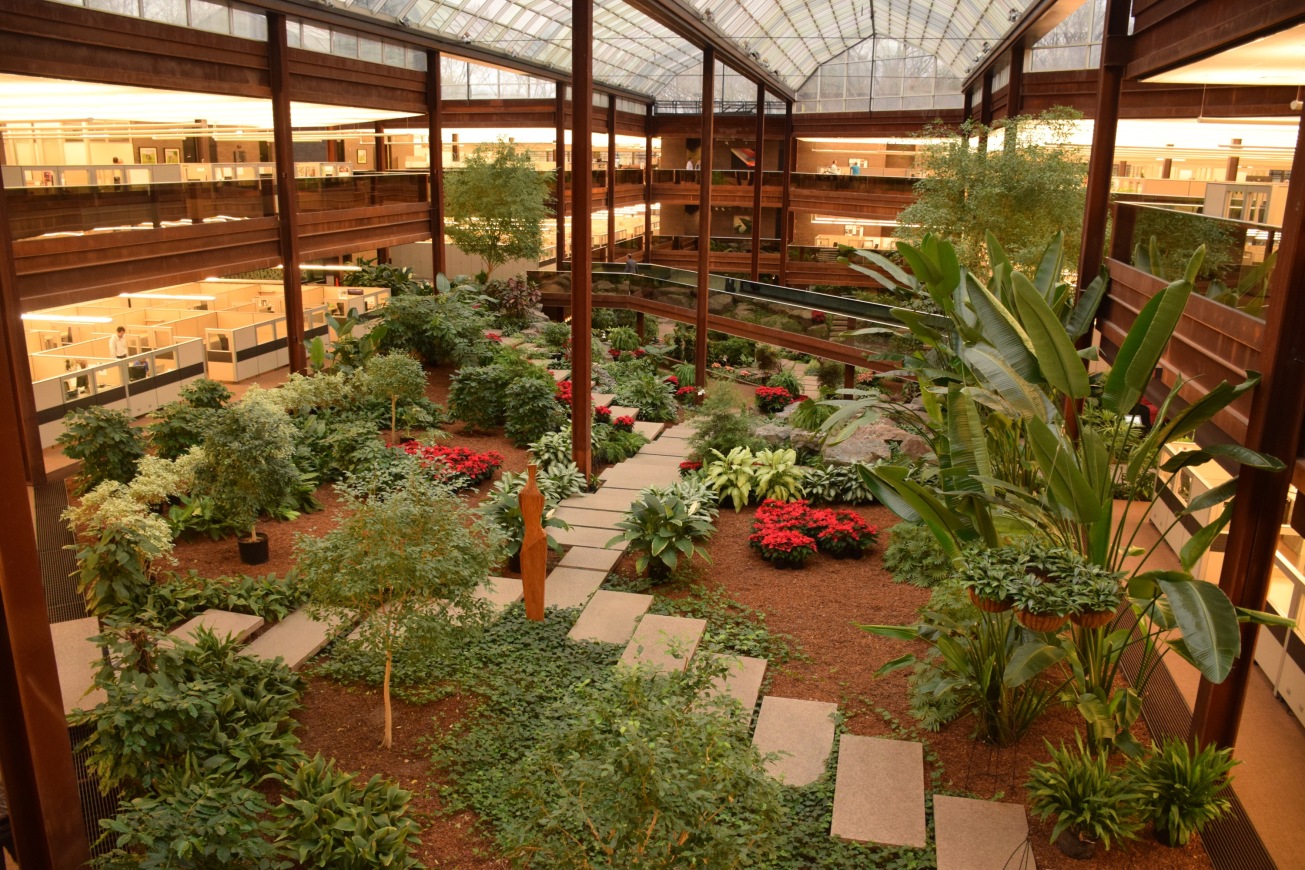 The greenhouses were also very impressive. Located about half a mile from the main buildings, Paula does a lot of propagation, rehabbing tired plants and bringing on seasonal blooms. The greenhouses are an interesting combination of fancy tech and old-fashioned gardening smarts.

This is the control panel which regulates temperature, the opening and closing of vents, shading and misting for the misting beds (used for propagation). (Very poor lighting here, sorry!)

Paula also creates a custom soil mix. Above this green bin is another level filled with bags of ingredients such as sterelite, peat, coconut hulls, etc which are poured into the bin from above in the correct amounts. The bin then spins to mix the ingredients. The completed soil mix is dumped into the flatbed of their little truck, ready for use. Shredded coconut hulls are also used as mulch as they are slow to break down and do not harbor inscects or diseases.

The greenhouses themselves are lovely with that healthy, earthy smell of growing plants. Paula does a lot of experimentation and testing techniques here and has propagated multiples of plants that allow for lush, full plantings in the atrium with minimal costs such as these fiddle leaf figs, the current darling of interior decorators (there are several larger fiddle leaf figs in the atrium as well)

Here is one of the tables of clivia. They’ll be moved to the atrium in the summer when they come into bloom.

These gorgeous poinsettia topiaries didn’t come into bloom in time for Christmas, but Paula plans to use them for Valentines Day. 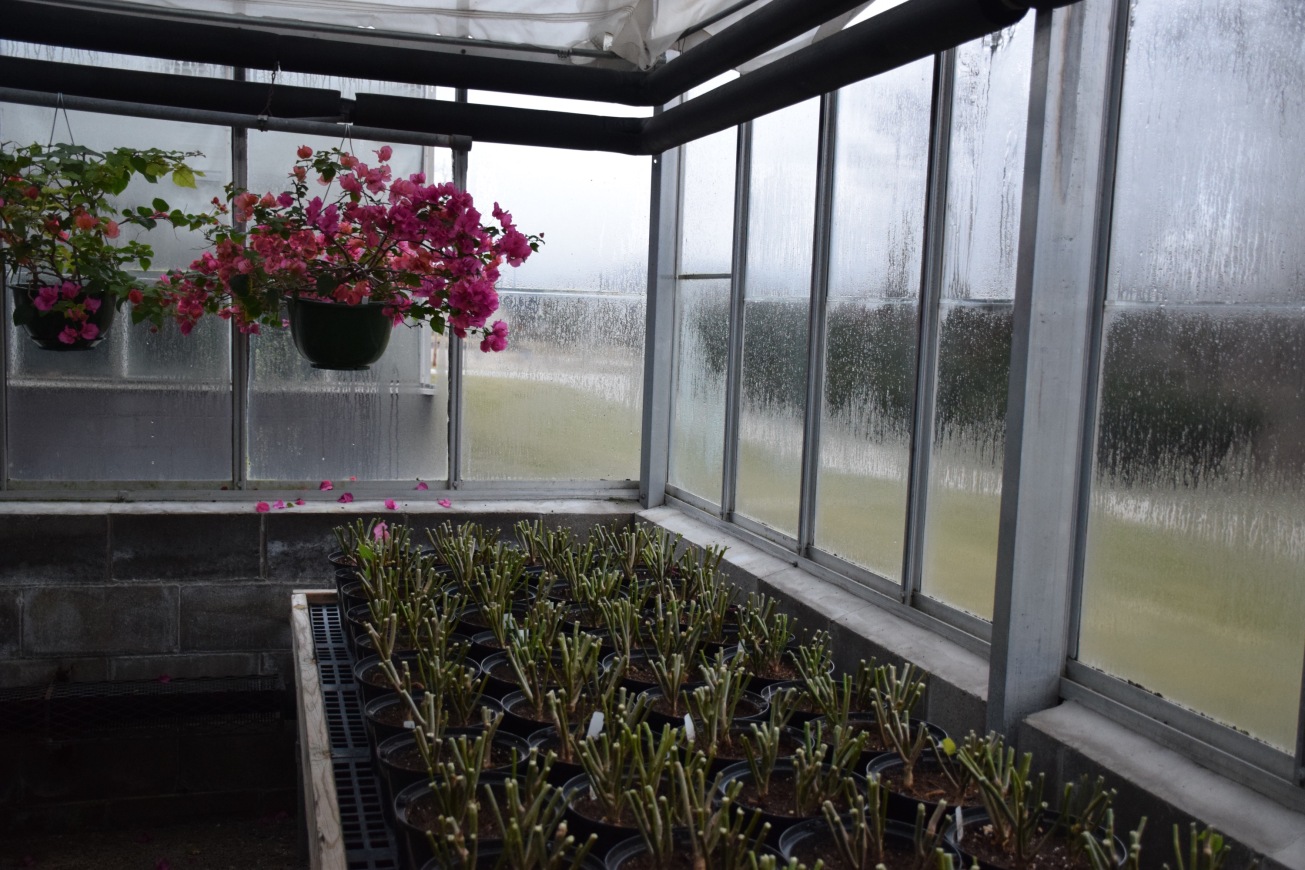 Poinsettias that have been cut back and will be grown now for their foliage.

This is a Calamansi, a cross between a kumquat and a mandarin.

There were many more treasures in the greenhouses, but it was starting to get late and time to head home. Huge thank you to Paula who is the best kind of gardener – curious, eager to learn, willing to try something and always on the lookout for a plant bargain and who is also happy to share her knowledge and beautiful gardens (her home garden is also amazing) with other gardeners. Thanks Paula, I had the best time!

One thought on “Here I Am”